The engineering networks serving this original building had already been brought to the plot, and a few years later we were also brought there.

Our task was to reconstruct the whole building as a full-fledged house intended mainly for weekend summer recreation. The priority was not to create family housing. So we had to deal with the exterior, interior and the whole garden, including fencing. We could create in a spirit that is close to us, ie. to combine a slightly industrial undertone emanating from the space of the original workshop with the sobriety of a country house.

The owner is a demanding and busy person, so the overall concept had to provide enough privacy and peace. The house should respect the overall character of the place, and inside be design tightened and designed in accordance with contemporary demands and standards. The sophistication of the exterior and interior also influences the owner's artistic work.

Gardens. We proceeded to shield the land from the street with a hedge of hornbeams in combination with the original stone wall, which circulates the entire land in fragments. The back is raised so that it can bring out a wooden pergola, which obscures the outdoor seating. In the middle of the garden there is a swimming pool. At the request of the owner, the overall concept of the garden is conceived as "relaxing", it does not want to be realized in watering flower beds with herbs and trimming trees.

Exterior. At first glance, it was clear that we must respect the surroundings, the nature of the buildings around, the regional architecture. Make as few interventions as possible to the existing building. In order not to have to make a new truss, we reinforced the original with steel welds, which then became the main supporting element for the interior. The owner had already completed the staircase from a previously not completely successful partial reconstruction. Its position in the attic did not allow to have a normative underpass height in the slope of the roof. For this reason, we evaluated as the best solution the construction of a dormer, which from the outside brings a non-original element to the appearance of the house, but in addition to the underpass height at the staircase, it also solves more generous space for both attic bedrooms. The right part of the building - the original workshop - has the original stonework, which has been cleaned and veneered. The left part was deepened by a total of about 300 mm by hanging the facade due to the requirement to build a garage, respectively. covered parking spaces. Cars and motorcycles will live there. The material composition was simple, it was enough to look around - we added a solid larch to the stone without a surface treatment, which will silver over time and create a patina the same as the barn around. Due to the access of light, we lined the façade with large French windows, the metallic black grid of which evokes the division of the original workshop windows.

Interior. When it’s possible, in our projects we like to connect the exterior with the interior so that the space blends. It is mainly material. Inside, we used the same solid larch as on the facade. In the living area there is admitted stone masonry and in the attic space there are windows and doors divided by a metal grid in the same rhythm as on the facade. Ceilings and vertical structures are covered with solid white wooden planks.

The lower space includes a living room with a projection screen and a small stove, which is very hot after an hour of operation, and a kitchen with a generous dining room. We conceived this part as a large cube, which is inserted into the space and contains a bathroom and a utility room. Its walls also form the back of the kitchen. The dining room is separated from the garage area by a window that occupies the entire cross-section of the building.

The attic forms a partial contrast to the ground floor - it should evoke airiness, timelessness, lightness. That's why we chose white and light shades, a little against our principles, we also used curtains so that a romantic moment could come. The whole space of both bedrooms is open to the top of the truss and we worked with the part above the kitchen and garage - a lot of airiness and generosity, which is intersected only by a footbridge leading along the entire length of the open part. We transformed the original light touch of the workshop into an almost loft concept according to the assignment, as the project assignment told us.

To enhance the feeling of a country house, we added a stone worktop in the kitchen, put a gutter instead of a washbasin, hung porcelain lights over the beds, built an old table in the dining room and a wooden chairs each one of a different shape. 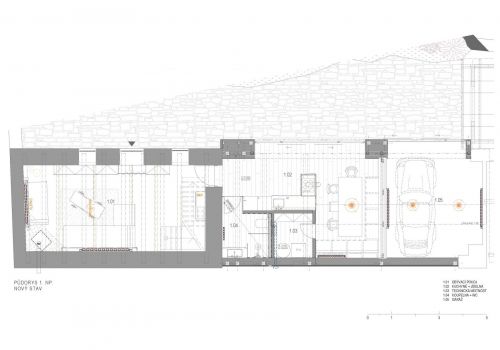 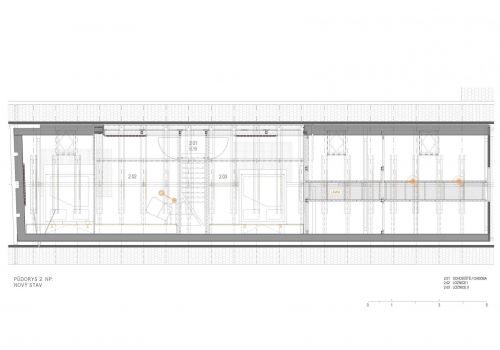 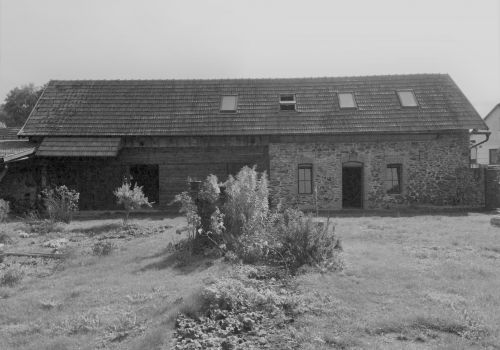