FLAT WITH A TERRACE IN STRAŠNICE

The task sounded clear. The interior of an apartment for a family of four must be practical and highly functional at all costs. We had to think mainly about the layout of the living area, where there was a common area for the kitchen and living area. The owner's request was a large and practical kitchen, while the owner asked for a smaller bar counter and a wine bar. Of course, there was a requirement for enough storage space.

We met with investors a long time ago, but because the elaboration of the project was postponed and in the meantime our "means of expression" changed a bit, probably the most difficult, but also the most fun point was to tune the right design line, which oscillated between the slightly classic taste of owners. and our typical simple technical manuscript.

Spacious, almost 120 m2 large apartment is located in the newly built complex Terasy Strašnice. It has several advantages that significantly increase its user value. It is not only the orientation of the house to the original Strašnice development, from which you perceive a beautiful cluster of roofs, but also the urban greenery, which seems to be within reach from the large 60 m2 terrace.

The whole project was built by a major development and construction company, so the biggest limitation was, of course, to find a balance between above-standard modifications and the limit of client changes.

Thanks to the generosity of the client, we were able to change even such fundamental things as light modifications of the floor plan, height and type of all doors, floor covering. Both bathrooms are made of above-standard materials from external suppliers.

The most important thing was to tune the right combination of materials that run throughout the interior.

We worked as usual with a minimum of colors and textures. The supporting element is an oak floor, which is also used on the main part of the furniture made to measure according to our author's designs. As an additional material for the furniture, we chose a smooth laminate in a deep matte, which makes the solid oak stand out. Another material that appears in the interior is concrete, whether in the form of wall screeds that pass on parts of the furniture, such as suspended lamps. The technical material that makes the whole thing special are the furniture constructions made of black iron.

A separate chapter was the complete modifications of electrical wiring - as usual, we play with light, so we lit the whole apartment "tailor-made". We worked both with light strips and with the backlighting of individual shelves and furniture modules. Both bathrooms then have the lighting solved by means of illuminated ceilings.

As for above-standard technologies, no complicated implementations were needed, the client was satisfied with the sound system of the bathrooms, bedrooms and the main space. Air conditioning was built into the whole apartment.

The project was not born easily, and that does not happen often to us. In the end, we worked on learning more variants than we are used to. We modified several times not only the combination of materials, but even the floor plan of the residential zone. But we must acknowledge one thing and, in the end, appreciate it. The client's "sympathetically exhaled practical pragmatism" forced us to pick up a pencil several times and sketch a new variant, which we finally liked. 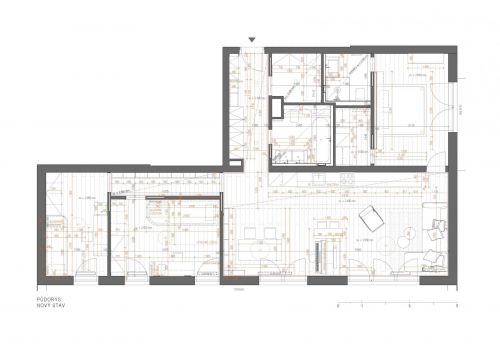 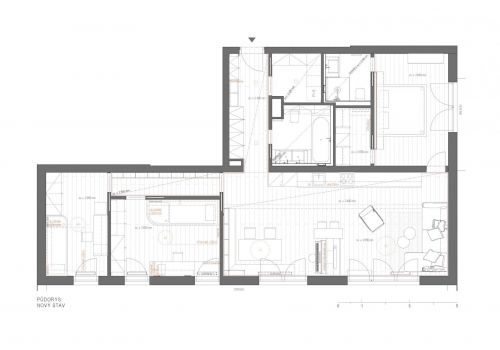