The apartment is located on the ground floor of a block of flats, which was built around the middle of the 19 century. At the beginning it was ment to be used as a granary but the all building is still nowadays breathing an industrial air.In the year 2009 the entire building was carefully reconstructed in order to be a residence building with no living apartments on the ground floor .One of these spaces is working as a rehab center as well.

The 5m x 7,5 m plant with kitchen niche could not be modified.
From the street view the facade is made of three main doors covering wide parts of the surface.
The main architectonic- artistic parts of it are the cast iron columns, which are connected with their tops to the  main original vaulted ceiling  about 5m high. Under the roof are located horizontal  steel ties which are also original.

The task we were given was to refresh the entire space so that the design could show helpfulness and timelessness of a unique space as this building in Karlin undoubtedly is.
The main request was to to project a built-in-core design in which you can find space for the office and a background  place for the owner, accessible from the new originated stairs.
Given the fact, that the space was adapted to be a rehab center about 8 years before, it was not necessary to change the plant of the space neither the communication zones.

We completely demolished the current core because it was done carpentry. We split the space in the different rooms and we had to weld the iron construction, which was covered by wood panels to create the new floor. We provided repairs of the kitchen, we fixed the final height of the floor. Electric and water pipelines were renewed and an iron staircase was added. Is made of clear safety glass.
In order to keep a higher ergonomics of the space we decided to mount cases for sliding frameless doors.
Plasters are made of stucco in combination with decorative concrete gravel.
The choice we made of colors and materials corresponds to our wish to stress the industrial character of the place, bring to the interiors the evergreen effect of basic shapes and lines and at the same time it builds a good and accommodating place for everyone who suffers from backache, cracking knees and all things coming from the wrong use of building materials. 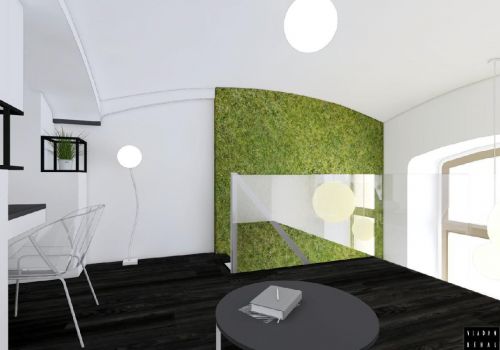 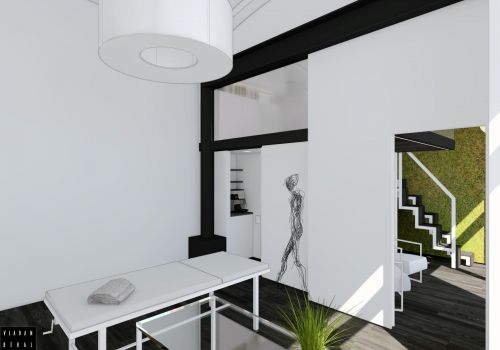 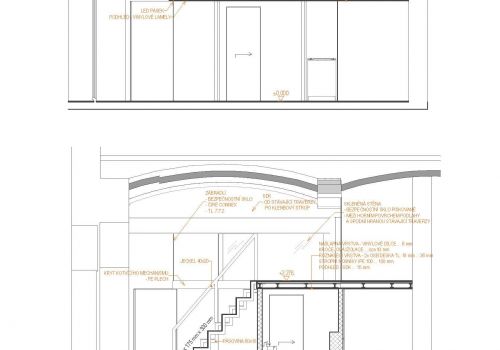