The space is located on the ground floor of a block of flats, which was built around the middle of the 19th century. It originally served as a granary. In 2009, it was sensitively rebuilt into an apartment building with ground-floor non-residential premises.

The square floor plan of 12 m to 12 m could not be changed. From the street point of view, the facade consists mainly of three large-scale shop windows with separate entrances. From the back, where the green atrium is located, there is a ground-floor glazed loggia of 20 m². The main architectural and artistic element is the original floor plan of the space into nine square parts. The division consists of 4 supporting cast iron columns placed on stone footings. The original vaulted ceiling is connected to the column heads. During the reconstruction of the building into an apartment building, new reinforced concrete pillars were embedded as part of the static securing, which replaced the function of the original cast iron ones.

The task was to create a representative showroom and a showroom with furniture and interior equipment and office facilities. The expression of the whole space was to correspond not only with the line of goods offered and the production of the studio, but also with the original space and the genius loci of the whole area. The decision was not to follow the path of contrast and tendentious solutions, but the path of timelessness and respect for the original space. As part of increasing the usable area, we designed the installation of a duplex unit, under which we hid the social facilities and storage. We designed the location of the office space and the private zone for the building itself. The intended materials for the reconstruction and the new parts were steel, concrete, glass and wooden segments. For the needs of the store itself, we designed custom-made furniture and equipment. A separate chapter was the design of space lighting - it was necessary to invent not only the lighting of individual products, work lighting, but also to model a number of luminaires from the range of the store. The task was also not only to use materials that describe the creation of the studio, but also to present to visitors and clients the final expression of the realization of the studio supplemented by the range currently offered.

After performing all EL and VZT activities, a new floor with a thickness of 120 mm was poured, the surface of which was provided with a protective coating. The original stucco plaster, which showed not only a trace of time, but also many damage, was only preserved, ie. mechanically cleaned and primed. A new plaster was applied to the perimeter wall, which is adjacent to the installation. The installation was then built into the space from Porotherm and covered with a triple walkable OSB board floor, placed on steel IPE profiles. In the central part of the space there is a large hollow pillar, in which risers are led to the apartments on the 2nd floor. This column was lined with four different types of wooden flooring that the studio offers. Doors, resp. the french windows remained the original from the time of reconstruction in 2009. As part of maintaining the overall industrial expression, a steel staircase was installed and safety tempered clear glass was used as the railing of the installation. The doors to the warehouse and to the bathroom were fitted with a concrete decorative trowel, which is also applied to all four walls of the building. The newly created social background was also conceived as a showroom. There are screeds on the walls and a barrisol foil was used to cover the ceiling and illuminate the space. Equipment such as storage cabinets, work tables, etc. was made to measure by a carpentry company. The reception bar, which significantly divides the space into a client and work zone, is created in-house from sheet steel and lined with solid rustic flooring. To illuminate the space and pattern the luminaires, we designed a supporting ramp made of rusty curry nets, which was suspended a meter under the vaulted ceiling. Other showroom equipment such as meeting tables, seating furniture, etc. consists of the range offered directly by the Vladan Běhal Design store. 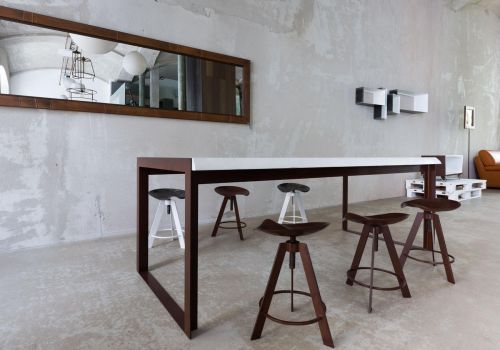