THE APARTMENT FULL OF WINE

Our dear client came back to us after completing his first order, that he made earlier. He was probably satisfied :-) We are no longer trying to make a design for design, but only "design". He bought a large apartment and wanted to turn it into his "manly cave” .

The oral assignment was simple - to keep our austere design, to bring a little wit to the interior, and most importantly to find a place for 1000 bottles of wine, which he collects and tastes. We had our hands almost free, so we hit the floor plan as well.

The apartment is located in a newly built apartment building in the wider center of Pilsner city. The whole apartment complex is very successful and is highly rated by the public and experts. The apartment has a beautiful orientation towards the river and a large terrace. We also connected two warehouses to the apartment, which has an area of approximately 100 m2, and thus reached the final approx. 125 m2. We also made floor plan changes in the sizes of the individual rooms. Because the assignment took place on time, we were able to influence the material composition of the construction of internal structures.

The basic principle of the whole project for us ,was the idea of the so-called inverse surfaces. This means turning the classic perception of materials in the rhythm of wood down / plaster vertically. We left the exposed concrete of the ceiling and had the floors poured with a concrete trowel (except for both bedrooms, there is a wooden floor designed). In order to insulate the interior and get wood into it, all vertical structures are made as panels covered with natural veneer. These panels are also fitted with unlined doors with a hidden door frame and some storage spaces. Another important building and aesthetic element are skylights. Between the ceiling and almost all vertical internal structures, we had glazed steel frames fitted, which not only make the apartment special, but mainly bring light into the long corridor and towards the bathrooms.

The entire interior design is designed in the spirit of our concept - the largest possible uniform areas, high doors, the minimum of materials used. We always rely on wood, concrete, glass and metal. We designed the furniture with an emphasis on purpose and its greatest connection with the interior. The kitchen uses a stainless steel worktop, which is again complemented by oak veneer and laminate in a dark shade. In the bathrooms, we proceeded to the experiment and the plates, which carry the sinks, are made of stone, which can also be found in the hallway and living room. These blocks are supposed to evoke "deferred" concrete panels. A surprising element in the apartment is brought by our author's dining table, which has very distinctive materials - roxor steel and Tuscan edible chestnut. The same material is used for continuous benches. The main lighting of the space of each room is provided by a minimalist rectangle, which is composed of aluminum strips with LED strips, which are anchored directly to the concrete ceiling.
We achieved the biggest task, fitting 1000 bottles into the apartment wine shop. In between of the projections and realizations ,we became friends with the client..So hopefully, we’ll get the chance to open one of the thousands of bottles together. 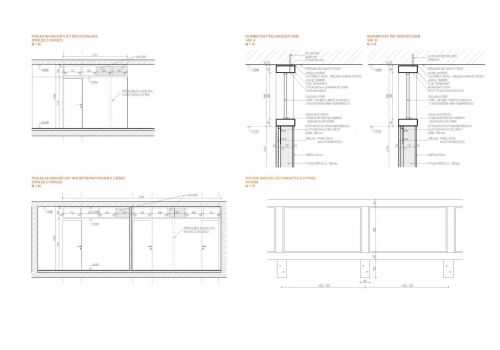 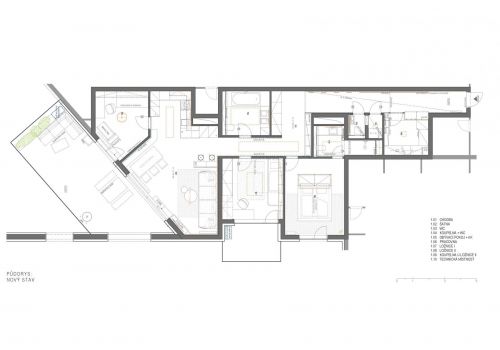 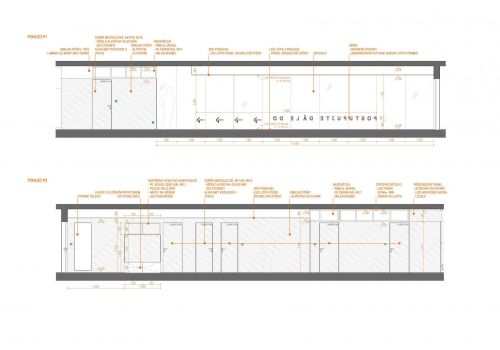