The apartment is located in the attic of a Karlín apartment building, and because it is an attic, it offers views, peace, space, silence. As the owner demanded, as we tried to meet her requirements. The young lady has been working abroad on various humanitarian missions for a long time, so the task was to create a timeless, simple space where she would like to return to recharge her batteries and rest - her own refuge.

The amount of the owner's claims gradually increased with the amount of development of the project. I am glad and appreciate that we finally got the green light and were able to take the originally more modestly planned reconstruction generously. The owner's distinct taste and clear opinion drove us forward.

Due to the fact that the concept was an "apartment for a single lady", it was not necessary to worry about the space for the family and the associated connections in the apartment.

The floor area is about 117 m². We changed the original 4 +1 concept to a generous 2 + kk in a maisonette. The apartment was fresh from a reconstruction , which, however, did not meet the current standards in the terms of quality. We demolished the bathroom and some partitions.

It was also necessary to level the floor levels. The biggest obstacle was the original staircase, which occupied a large part of the main living space, and mainly blocked access to the kitchen. It was replaced by miller's stairs, which we dressed in a modern jacket.

As part of the lighting of the entire apartment, we installed new roof windows at the height of the gallery and covered the open rafters with a net, which also serves as a relaxation zone with a view of the sky. The window in the dormer in the dining room was replaced, now it is possible to open both wings and the person "has breakfast outside". In this apartment, we have applied a new concept of using flooring, which is also used for furniture.

I am pleased that we were also able to create a job behind a closed door, from which I have a good feeling. 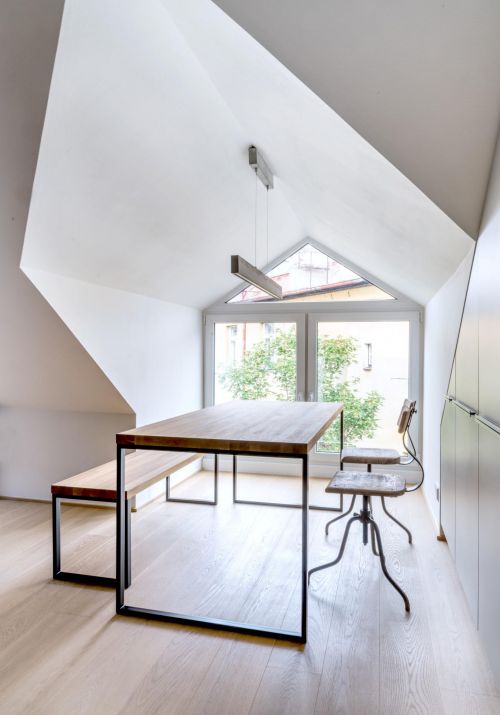 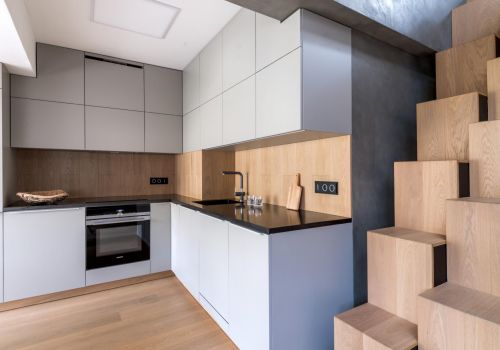 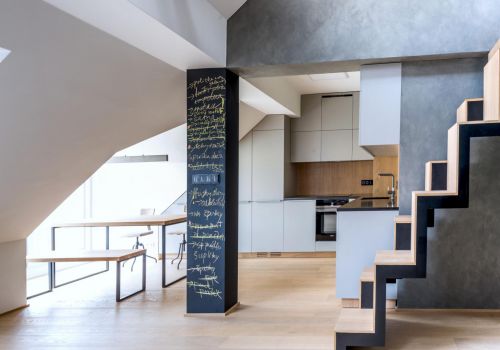