A young and more than well-situated family decided to buy a 320 m2 large apartment in one of the modern Karlín projects in Prague. The complex has beautiful views of the river and the greenery, the apartment nás the size of a family house. So who not? The young couple travels a lot, especially in Asia, and during these holidays they were positively influenced by the local living culture.

We had a very difficult task for several reasons. First of all, our clients had never worked with architects before, so it was necessary to divide the tasks and, most importantly, to precisely define the assignment, which turned out to be quite difficult. The area of the apartment is huge, at least thats how it seemed to us at the beginning ; however, when we understood how demanding our clients are, it was clear that we would have to measure the entire floor plan in millimeters. The project was to include a large games room / workshop, a huge amount of storage space, a large kitchen connected to the living room, a gym, separate offices and a large relaxing bathroom - and here we thought - it will be an apartment with some elements reminding them of Asia. Lots of greenery, relaxation zones, woods and open spaces.

The floor plan of the apartment was divided into a living day, parents and children's zone. The generous living space faces the greenery and offers beautiful views. The kitchen has dimensions not unlike those in a restaurant.

The main supporting element, which also makes the whole apartment special and gives it life, is the use of green walls. We designed them on continuous walls directly at the entrance to the apartment, in the main hallway and in the large parents' bathroom, where there is also a sauna. In order to open and connect the space and obtain interesting views, glazed partitions with green vegetation are designed in some places. For example, in the hall you can see through the greenery through controlled dimmable glass to the study. Another element that we used to evoke Asian interiors with wooden prisms. We used them in the ceilings as their irregularity is interesting, which "brightens up" the interior.

Throughout the apartment, we designed a very sophisticated backlight with LEDs in warm chromaticity to further enhance the relaxing atmosphere of the space. For example, the backlight is between the prisms of the ceiling in the kitchen and the large bathroom. In addition to the already mentioned greenery, the wall surfaces are made of fine concrete trowel and wooden cladding. In this project, contrary to our custom, we did not make a wooden floor everywhere, but chose the appropriate coverage for the individual zones. Solid slabs are in the living area, while bedrooms and walk-in closets are carpeted. In the warehouses, and especially in the game room / workshop, there is then a cast trowel. At the front door there is a compass that helps guests not to get lost in the majestic space. 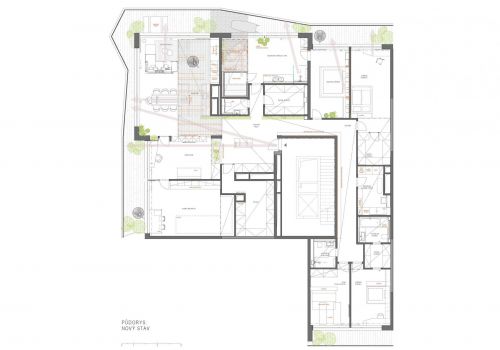